The Hertfordshire Telecare Service supports almost 4,000 people in Hertfordshire to live more independently in their own homes. Telecare systems use discreet sensors in the home to automatically call for help in the event of an emergency, such as a fall. Users can also press the button on a pendant worn on the wrist or around the neck to call for help. Calls will be answered by friendly, professional operators at a specialist monitoring centre which is open 24 hours a day, every day. They will call a nominated contact, such as a neighbour or family member, or if they cannot be contacted will send a British Red Cross responder or the emergency services, depending on the situation.

Here’s an example of how the service helped Norman*:

Norman has vascular dementia, and lives alone, although his daughter lives nearby. There is CCTV installed outside Norman’s home which his daughter is able to view remotely to make sure her father is safe and well. Norman has also been provided with a GPS tracker device, which enables his daughter to locate him should he leave home and be unable to find his way back. This has happened on several occasions.

Norman’s daughter asked the Hertfordshire Telecare Service to advise on technology that could help her father remain living at home safely. Following an assessment, a telecare system was installed, with sensors to detect floods, fires or carbon monoxide in Norman’s home, and automatically raise an alert via a Lifeline home unit at the monitoring centre.

Property exit sensors have also been fitted which will raise an alert at the monitoring centre if an external door is opened. A specially trained operator at the centre can then talk to Norman through the speaker on the Lifeline unit to assess the situation, and make sure Norman is OK. If the operator is unable to get a response, they can contact Norman’s daughter, or the British Red Cross Responder Service so they can check on him.

In the weeks after the system was installed, a property exit sensor was activated three times. On two of these occasions, the monitoring centre successfully made contact with Norman, but on the third there was no voice contact. The monitoring centre contacted his daughter to ask her to check the CCTV system to see if her father had left the property, and she saw that he had. The monitoring centre also contacted the British Red Cross Responder Service to attend, and they later reported that Norman had been found safe and well and had been helped to return home.

The Telecare Service means that if Norman leaves his property and is at risk of being unable to return, his daughter or the Responder Service will be quickly made aware, avoiding him being at risk. It also means that Norman is able to remain in his own home, rather than being admitted to residential care for his own safety.

Here’s an example of how the service helped Margaret*:

An operator at the Hertfordshire Telecare Service received a call at the 24 hour monitoring centre as a result of Margaret pressing the help button on her fall detector. The operator was unable to hear Margaret over the sound from her television, and so tried to call her on her landline which Margaret answered remotely using her pendant, but the operator was still unable to hear her. The operator therefore requested that a British Red Cross responder attend.

The responder gained access to the property using Margaret’s keysafe, and found her slumped in her chair next to an uneaten meal. The responder helped Margaret to sit up and contacted her carers to check whether she was usually able to feed herself, and they confirmed that this was the case. The responder also noticed that Margaret’s mouth was slanted and her speech was slurred. The responder asked Margaret if she had feeling in her arms and she confirmed she could feel her right arm but not her left. The responder contacted the monitoring centre via the Lifeline home unit and asked the operator to call for an ambulance as it was suspected Margaret had had a stroke. The ambulance arrived within five minutes and paramedics confirmed it was likely Margaret had had a stroke and took her to hospital. The operator called Margaret’s family to let them know the situation. Without the Telecare service and response from British Red Cross it may have been several hours before Margaret received help, which could have adversely affected her recovery.

Without the Telecare Service and response from British Red Cross it may have been several hours before Margaret received help, which could have adversely affected her recovery.

*Not her real name

Here’s an example of how the service helped Stephen*:

Stephen has complex physical conditions resulting in poor mobility and the risk of falls. He lives with his father who has dementia, which means he doesn’t always understand his son’s condition, and was continually pressing the help button on the Lifeline unit when he was trying to use the telephone. Their relationship has deteriorated to the point where Stephen is afraid to report any concerns as he fears his father will remove him from the property.

Stephen has now met with his social worker and received an occupational therapy assessment, with a view to him having help and equipment at home to help him be less dependent on his father, as well as opportunities to get out more. Stephen has bought a set of cordless phones so that he and his father can answer the phone to help avoid inappropriate use of the Lifeline. The responder also requested that an Adult Social Care review be completed for Stephen’s father as his condition is deteriorating.

The Hertfordshire Telecare Service has resulted in both Stephen and his father receiving more appropriate support, which will help them to remain independent at home for longer.

Here’s an example of how the service helped Bill*:

Bill has a diagnosis of Alzheimer’s disease, and lives alone. His property has a telecare system which includes a property exit sensor fitted to the front door. This will raise an alert at the Hertfordshire Telecare Service monitoring centre if Bill leaves his home.

One cold autumn morning the monitoring centre received an alert on their system to say that the property exit sensor on Bill’s home had been activated at 5.20am. An operator tried to contact Bill, talking to him via the Lifeline unit in his home but there was no response. The operator called Bill’s daughter, who went to his house and at 6.00am notified the monitoring centre that the house was empty and the family were going to search for him.

Fortunately, within half an hour Bill was found and back at home. Without the telecare service it could have been many hours before the family realised Bill had left home. During this time he could have moved much further away, making it harder to find him, and increasing the risk of him coming to harm. 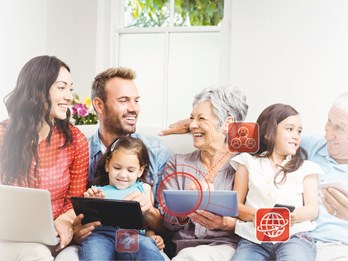 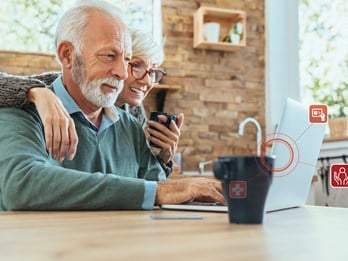 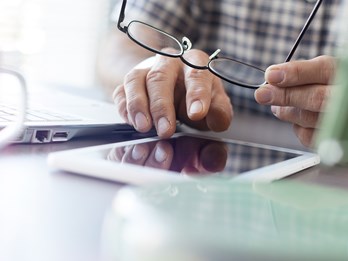